We will use cookies to improve our services and remember your choice for future visits. By clicking "Accept cookies”, you consent to the use of cookies for the pages bodor.com and the sub-pages.

Why is it the Next Generation Metal Cutting Machine?

Players in the laser cutting market endeavor to bring machine power options to a wider span, but manufacturers are in favor of cutting tools that give higher efficiency and stronger productivity with less cost. Though higher and higher power of laser cutting machines helps to get an increase in these demands, which enable users to cut most materials at common thicknesses in the market, they consequently require much more purchasing costs, consume much electric power, and need more frequent maintenance. Therefore, the next trend should lie in improvements and optimizations in speed and cutting thickness, based on current laser machine power options.

The Laser Scanning Cutting Machine is Bodor’s latest, innovative, and the world’s only laser scanning-type machine for the laser metal cutting industry. The new generation laser cutter, which creates a brand new category in the industry, is developed by the Bodor R&D team to subvert the high-power-oriented market. With its potential of much better cutting performance compared with the conventional laser with the same power, the Laser Scanning Cutting Machine marks the new trend and new generation of laser cutting machines.

Being the new category in the industry, which sets a new standard with beam path programming. According to the R&D team of Bodor, it achieves a much faster cutting speed, much thicker cutting thickness than conventional cutting with the same power, thanks to a scanning-type beam motion control and 1000+ patented algorithms. With a high-frequency scan at 200 times per second, its beam locus covers 30 meters at the fastest when cutting one meter.

1.Thanks to the advanced beam locus motion control technology, the scanning cutting speed increases by 50%-180% compared with conventional cutting with the same power and sheet thickness. 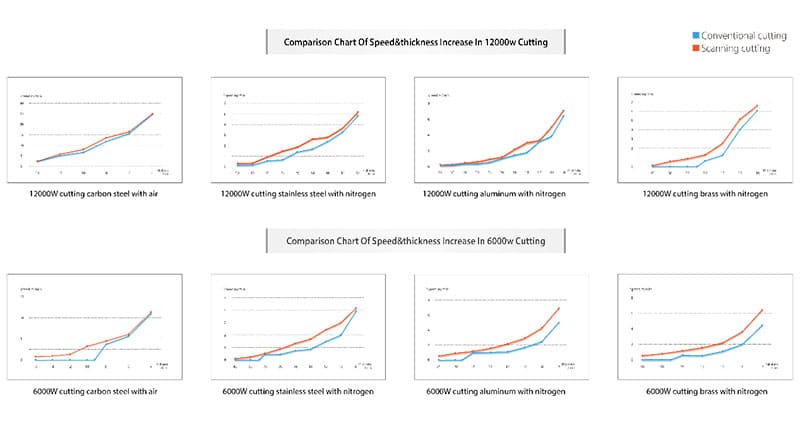 "Originally, when cutting a 5mm copper sheet, our cutting speed was 1.5m per minute. Now, since we changed to the laser scanning cutting machine, the cutting speed has reached up to 2.8m per minute. It is really satisfying. In addition, the cutting surface effect is also very good, especially at 12000W," says Wang, president of Taishuo Machinery Co., Ltd. "When cutting stainless steel, the scanning laser cutting machine has greatly improved our efficiency. The speed of air cutting has more than doubled. When cutting aluminum, the efficiency has also been greatly increased by about 60%."

With the world experiencing fast changes on small and huge issues, which the pandemic does not slow but accelerate, people’s lives and ideas are greatly different from them even just one year ago. Sometimes, the external production environment for manufacturers pushes them to change to new technologies and tools, making themselves survive competitions and win success.

Bodor believes laser technologies will change human life, so change is a very important factor in our core value. And since its inception in 2008, innovation has been the driving force of Bodor’s growth and significant changes. After new records (5172 units of machines dispatched) and new milestones for its mission in 2021, Bodor is accelerating technology changes and pacing forward more efficient laser cutting. Therefore, the company implements self-developed, advanced, and disruptive innovations on laser head, laser source, CNC system, and mechanical components to provide better manufacturing productivity for global customers to prepare for a future change.

"Bodor praises disruptive innovations like the style of Silicon Valley. We believe that human betterment and organization transition starts at disruptive innovations to conventions, which cherishes most on Zero to One, but not the duplication and involution from One to N," says Kong Jie, president of Bodor Laser.

As a global company, we understand that a successful enterprise must be able to fulfill clients’ needs and demands for a sustainable future. With the strategy of focusing on laser cutting machines, Bodor will continue innovation and create more value for its global customers.

Regardless of whether you require general advice or specific support, we are happy to help you.